XJDeveloper is a graphical application that allows you to quickly and easily set up and run tests on your circuit. With XJDeveloper you can reduce your time to market by reusing your test scripts all the way through the product design process and then in manufacturing.

XJDeveloper is a graphical application that allows you to quickly and easily set up and run tests on your circuit. With XJDeveloper you can reduce your time to market by reusing your test scripts all the way through the product design process and then in manufacturing. XJDeveloper Advanced graphical interface

XJDeveloper’s built-in connection test, combined with XJEase tests for non-JTAG devices, checks your boards for short-circuit and open-circuit faults. Using XJDeveloper you can easily create or customise tests. All the tools you need are built in, including tools for DFT analysis, Layout Viewer, Schematic Viewer and the Netlist Explorer to show connectivity between devices.

Testing with no netlist

If you don’t have the netlist for a board you need to test, XJDeveloper allows you to base a test system on the BSDL files for the JTAG devices on the board rather than forcing you to use a netlist. The system can then automatically learn from a golden board the connections between the JTAG devices for use during connection test. You can also add additional non-JTAG device such as RAM, flash or devices on peripheral busses such as I²C and SPI, in order to extend the test coverage. XJDeveloper Advanced graphical interface

A proprietary connection test can be run on the board as part of a script. By making use of its knowledge of the nature and interconnection of the devices in the circuit, XJTAG is able to test a higher percentage of a circuit than most other JTAG solutions. By monitoring the status of the devices in the circuit, XJTAG also provides you with more information about the location and precise nature of any faults that are found. Clickable links to the Schematic Viewerand Layout Viewer assist the user to understand or visualise the faults on a board.

A large number of device files for testing non-JTAG devices are available in the installed XJEase library, including examples of programming. Even if you have never used JTAG before, it is possible to create a fully functioning test system with no extra programming.

If you can’t find a file for your exact device, you can start with the file for a similar device and make a few changes to adapt it to yours. We also offer a consultancy service to design tests to your exact requirements. XJDeveloper Advanced graphical interface

All the advantages and flexibility of a programming language, such as loops, variables and flow control, can now be applied to developing device and circuit tests. By generating test patterns as required, under the control of a high-level XJEase program, you can use XJTAG to easily develop complex tests not possible with many other JTAG solutions.

XJDeveloper contains a software debugger for use during XJEase development and prototyping.
This debugger allows you to: 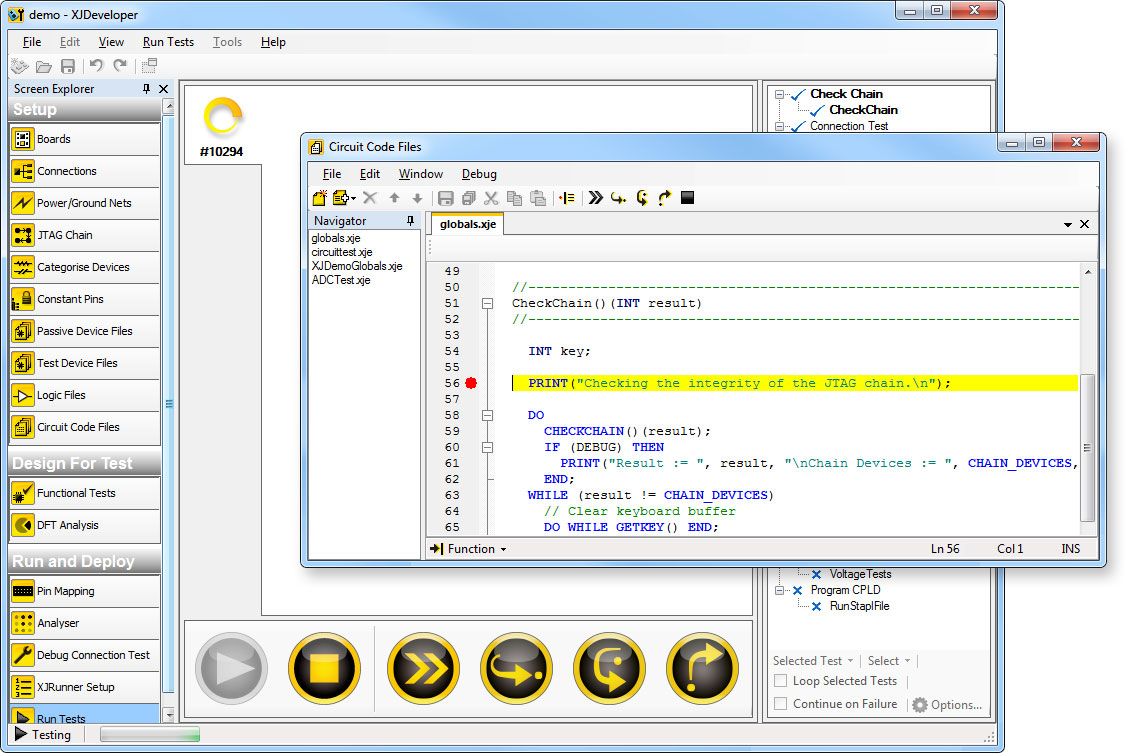 Building an XJDeveloper test system requires no knowledge of the underlying JTAG technology. All device tests written in XJEase are independent of the specific circuit under test. Tests are written from the device’s perspective; they specify the pin levels required to run the test and any pin states expected as a result. XJTAG then uses its knowledge of the circuit to create test patterns that will achieve the required inputs. This means that once tests have been developed for a device they can be reused in any circuit without any additional work.

XJDeveloper can be used to test or program non-JTAG devices including Flash, all types of RAM, FIFO arrays, IIC devices, SPI devices and Ethernet controllers.

No need to understand how JTAG works

If you do have to create your own tests XJDeveloper makes this easy by abstracting the description of how a device is to be tested from the detail of creating the JTAG test vectors to implement those tests; this means that the process of developing tests for your non-JTAG devices is quick and easy. XJDeveloper Advanced graphical interface

XJDeveloper will check that the pins on a device to be tested are on nets accessible from JTAG devices and then work out which JTAG device pins must be manipulated to access the correct nets. 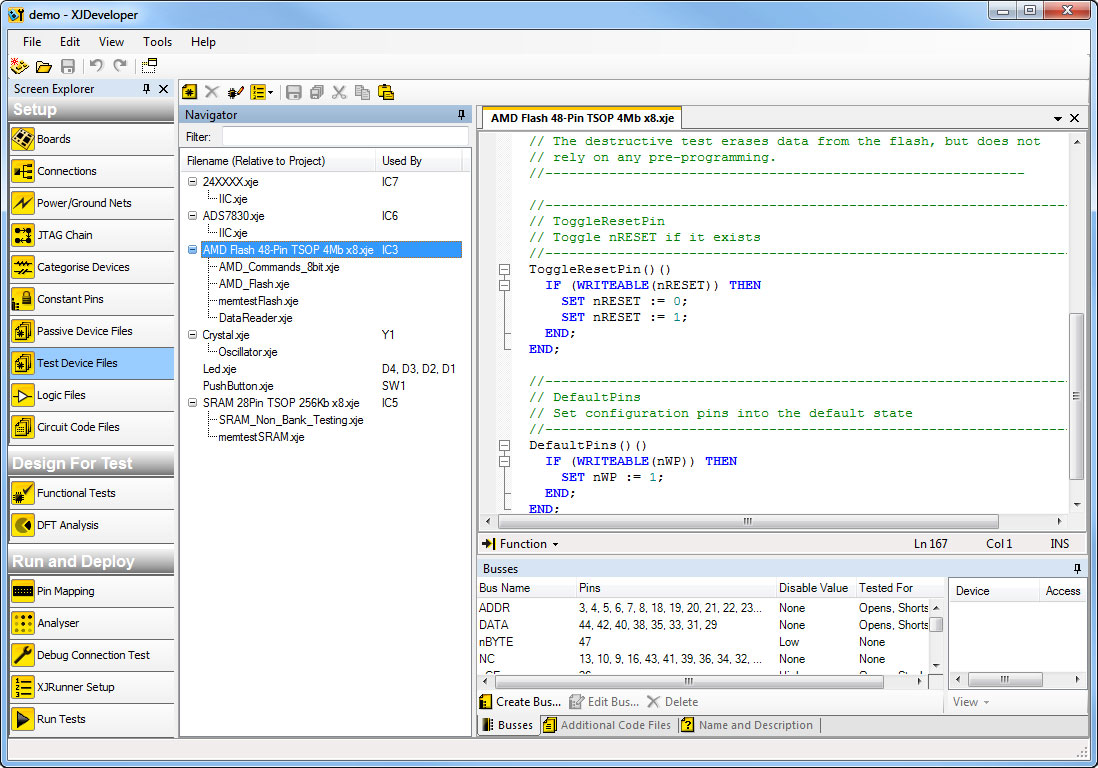 Similarly, once you have a test file for a device, it can be reused whenever that device is part of another circuit.

Testing multiple boards is as easy as testing a single board. There is no complex merging to be done; simply give XJTAG the netlists and tell it how the boards are connected together. Everything else is worked out by the underlying engine at runtime.

You can run tests from within XJDeveloper. However, there are other ways of running your tests, depending on your requirements. XJDeveloper Advanced graphical interface

XJRunner is our run-time solution for the production/servicing environment. It is aimed at board manufacturers and/or in-field testing, with additional logging, serial numbering and user management capabilities. It has both a GUI and a command-line version, to allow you to integrate XJTAG with other test systems. The GUI can run tests on multiple boards simultaneously for use in manufacturing applications.

XJTAG supports a wide range of netlist formats that the system automatically parses, identifies and accepts. You should be able to use any ASCII netlist; however if your netlist is not recognised, please contact XJTAG Support and we will be happy to convert it to a format that works and add a parser to a future release. XJDeveloper Advanced graphical interface